What is Ornithine Transcarbamylase Deficiency (OTC) ? 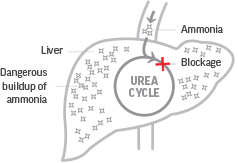 Ornithine Transcarbamylase Deficiency (OTC) is a serious and potentially life threatening metabolic disorder, under the general category of "Urea Cycle Disorders". This is a condition in which the handling of protein and its breakdown leads to a rise in Ammonia which without the appropriate treatment, can lead to significant morbidity and mortality.

Ornithine transcarbamylase deficiency is an inherited disorder that often shows symptoms in the first few days of life, normally if boy’s aren’t diagnosed very early on it is likely they will die sadly (wrongly being put down to cot death or suspected meningitis ) because they do not have another X gene to compensate, (although I have heard a few cases of boys undiagnosed living well until adulthood) Where girls may survive untreated longer although at extreme risk of significant morbidity and mortality if their affected X is located within the liver.

An infant with OTC may be lethargic or unwilling to eat, vomiting more then usual infants and have poor breathing rate or body temperature. Some babies with this disorder may experience seizures, or go into a coma. Complications from ornithine transcarbamylase deficiency may include developmental delay and intellectual disability, liver damage, skin lesions, brittle hair.

In some affected individuals which is extremely likely to be girls, signs and symptoms of ornithine transcarbamylase may not appear until later in life but have a history of Vomiting, hallucinating, Lethargy, being very fussy eaters (which is them unknowingly restricting there protein) may be pale skinned. Some affected by Urea Cycle Disorders also have a diagnosis of autism. if the condition is undiagnosed and untreated, hyperammonemic coma or death may occur. If an undiagnosed affected women later in life has had very few symptoms it’s likely the good X as well as the Bad X is within their liver compensating but undiagnosed and untreated, hyperammonemic coma or death may still occur. Once an individual has been diagnosed, the treatment goal is to avoid precipitating episodes that can cause an increased ammonia concentration. The most common treatment combines a low protein diet with nitrogen scavenging agents. A liver transplant is considered curative for this disease.

I think I may have Ornithine Transcarbamylase Deficiency (OTC) who do I Contact?.

If you recognise any symptoms of Ornithine Transcarbamylase Deficiency (OTC] within yourself or your child (Boy or Girl) you should contact your Local GP immediately for a referral to see a inherited metabolic diseases specialist. See Resources for more information.

"Ornithine transcarbamylase deficiency is believed to occur in approximately 1 in every 80,000 people."